Editor’s Note: This article has been generously contributed by Bolo.

“When the system breaks down, we all break down.” – Sgt. Barnes – Platoon

Tactical camping is a great way to develop and sharpen many essential survival skills. But, beyond these skills there is a particular discipline that needs to be practiced; one that will improve your ability to travel through unfamiliar or potentially unfriendly territory during dangerous times if circumstances should require it. Most people don’t think about evading detection because their day to day lives don’t depend on it.

To my way of thinking, there are three issues that risk the safety and obscurity of a group in camp. These are visibility, noise and odor. I will leave it to you to visualize the circumstances under which these risks might apply, but the general scenario is that you are on the move between points A and B of indeterminate distance. Whether you are alone or traveling in a group, on foot or caravanning with several vehicles, the issues are the same.

Importantly, I am excluding urban or other densely populated areas from this discussion. They are not in my field of expertise and frankly, I don’t spend much time thinking about cities. My presumption is that you have successfully evacuated from an urban/suburban location and are traveling through rural, less populated country.

As a Prepper, you either already have a plan or you are working on one. It should mean you have a rally point where your group will assemble, that you and everyone else know the route to the destination, and that you have pre-established way-point locations where you will lay up while en route to that chosen destination. It will mean that you have taken congestion and potential roadblocks into consideration. Finally, it will mean that you have evaluated fall-back sites and alternate routes that may be needed to reach your objective.

The thrust of the title is that you need to be a ‘hole in the dark’ for all three issues. In other words, an apparently dark camp can still be exposed by excessive noise, the odor of drifting smoke or food preparation. What techniques can you employ to establish and maintain a profile that is ‘dark’ to all aspects of the human senses? 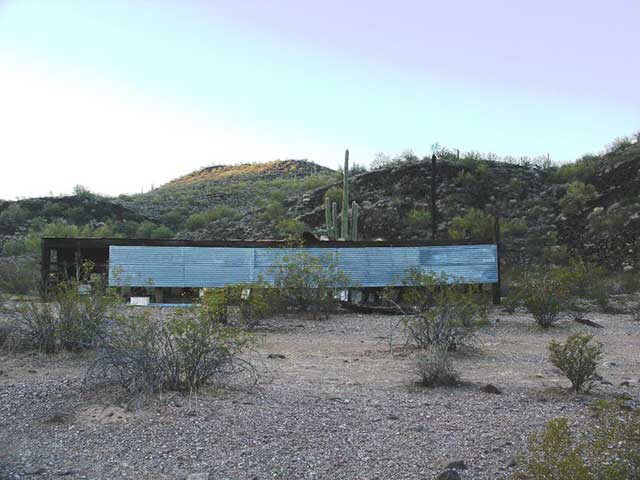 Abandoned structures can be ideal locations for concealing a tactical camp. In this photo, six vehicles are parked behind an abandoned beehive that is about 100 yards away from a 2-track road.

But first, what is the best time of day to be on the move with a group? The answer will most likely be based upon the group’s overall capabilities, the tools and resources at your disposal. If you opt to travel only at night, but you have no night vision goggles, then your rate of travel may be exceedingly slow. It will be further hampered in rough terrain where you are required to distinguish safe from unsafe trails. My general bias is to move in daylight and camp at night, but there are conditions, such as familiar terrain, ample moonlight and an experienced team that I’m working with, where I would flip the preference.

The discussion that follows reflects my bias for laying up at night. I have practiced these disciplines under a variety of weather and terrain conditions, both singly and in groups ranging up to a dozen people.

Night vision would allow you to move without external illumination and hides your location from others. 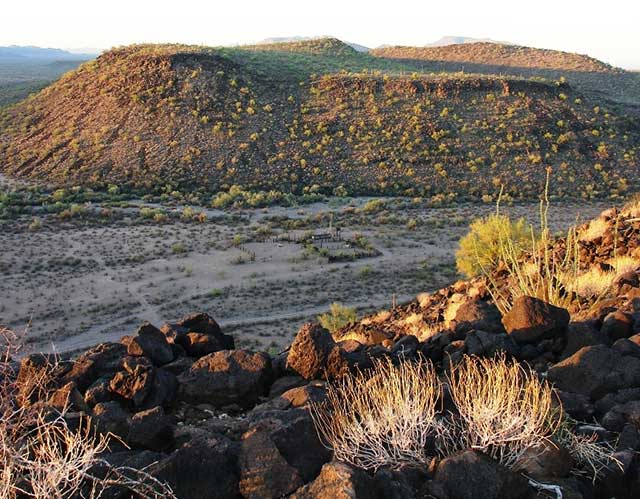 In situations where complete concealment is not possible, your camp can be effectively obfuscated by using features that break up the profile. In this photo, corral posts and rails, an abandoned well and native brush served to mask the presence of a camp. 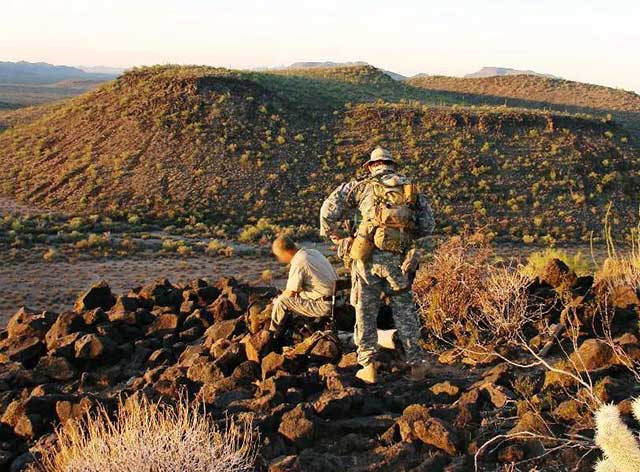 An effective security perimeter is not constrained by two dimensions. This photo shows a surveillance LP/OP that was located on a hilltop 300 feet above and 1100 feet away from the corral shown in the previous photo. Locations such as these can provide significant tactical advantage. Communication between the LP/OP and camp were maintained via radio.

I am somewhat reluctant to open this subject, but the exposures are real enough and they are played out every night along the Southwest border with Mexico.

If you envision bug out circumstances that tend toward the extreme, such as attempting to move through an area after martial law has been declared, there will be other considerations that apply to concealment. For example, the government could enforce martial law over large areas through the use of surveillance aircraft equipped with thermal cameras, FLIR and ground surveillance radars that detect motion against a stationary background.

In case it hasn’t occurred to you, the Department of Homeland Security already uses hundreds of fixed and rotary wing aircraft, a fleet of Predator UAVs, mobile vehicles and portable manned surveillance equipment. These are used to detect and apprehend smuggling groups along the U.S./Mexico border. Under conditions of martial law, some of those assets could be redirected to the detection and apprehension of citizens. In circumstances such as these, you could be dealing with a potentially hostile and/or desperate populace as well as a government that wants to find you. Their motivation may not be particularly humanitarian.

The type of surveillance aircraft referenced above have the ability to detect heat signatures at distances of fifteen miles or more. They can differentiate between you and a warm rock. They can detect a stationary vehicle, even though the engine hasn’t been running for two or three hours. They can detect your movement, course and speed. If that isn’t enough, their thermal cameras are capable of identifying if you are carrying a long arm.

Fixed wing aircraft generally operate at altitudes of 8,500 to 10,000 feet, while Predator UAVs typically patrol at altitudes ranging between 19,000 and 21,000 feet. Generally speaking, all of these aircraft are quiet and they patrol without running lights. In other words, you will not see or hear a surveillance aircraft that is orbiting your position from seven miles out.

Most night time detections occur where groups are laid up or moving across open ground or along ridge lines.

Against these capabilities, the basic concepts of maintaining a dark camp require added precautions; particularly if you are outdoors.

I have not experimented with heat cloaking devices, so I cannot make recommendations regarding the efficacy of any product or technique. If anyone has experience or suggestions on this subject, I am all ears.

The probability of surveillance aircraft being deployed during or after a major SHTF scenario (that is, one that pulls large numbers of CBP aircraft away from the border) is probably very low. I know of no situation, such as a major hurricane or earthquake, where this has ever happened. Other assets, such as National Guard and state Department of Public Safety aircraft, are more likely to be used for search and rescue operations.

Circumstances that might lead to a declaration of martial law across a major region or the entire country are far harder to visualize to any reasonable level detail. The deployment of surveillance aircraft against citizens under martial law conditions would certainly require a functioning central government, and motivations could range from the elimination of armed bandits to the suppression of rebellion. The problem is that an aerial surveillance camera operating at 19,000 feet will not know that you are merely trying to get home. My only recommendation is “when in doubt, assume the need for maximum precaution.”

If it is any comfort, Border Patrol agents optimistically estimate that they succeed in apprehending somewhere between 35-40% of illegal aliens that cross the border. Their estimate of success for drug smugglers (the wiliest of all creatures) is even lower; in spite of the surveillance technologies that I’ve described above. For the most part, smugglers that successfully evade detection use terrain to their advantage.

More than anything else, being a ‘hole in the dark’ is a discipline rather than a set of tools. Certainly, tools can help, but they cannot offset poor security practices. If you don’t plan and prepare for the circumstances that require you to exercise those disciplines, you are placing yourself at risk. Any bug out destination that you have in mind is likely to require one or more lay up sites along the way. Your survival may very well depend on knowing in advance where they will be, as well as the steps needed to assure a secure camp.

I welcome your comments and questions.

Source
A Hole in the Dark: Techniques for Maintaining a Dark Camp is written by Bolo for theprepperjournal.com