In close quarters, defensive shooting, you do not aim as such using your handguns sights, because you usually you do not have time for this. You use a method known as instinctive – or point shooting. Instinctive shooting is simple you point the gun and pull the trigger. You need to ensure you have a good grip on your handgun, your wrist is locked and the forearm of your gun hand is in line with your handgun.

For instinctive or point shooting at ranges of about 3 to 10 yards, you should bring the handgun up with stretched arms at chest or chin level, with both eyes looking at your target area. Point the handgun at the target area (i.e. head or chest); when the target is aligned, you fire. There is no need to use the sights, you simply point and shoot. I have seen students, who have been taught to always use the sights on their handguns, even at close quarters, and have difficulty getting good results when shooting. This is usually because they are concentrating too hard on lining up their sights. They are usually amazed how easy, fast and what good results they can get from point shooting. You want to practice instinctive shooting with an unloaded handgun before you go to the range. To start, pick a point in the room you are in, for example, a light switch. Now with a straight-arm point your finger at the switch. Look down your arm and see where your finger is pointing- it should be pointing at the switch.

You have been pointing at things your whole life right? Practice this a few times and then try it with an unloaded handgun. Point the handgun at the switch without using the sights and then look down the sights to see where the gun is pointing. It should be pointing at the switch. If not, adjust your aim and try again. You should practice this strong and weak handed while sitting, standing or lying in bed, this will build up your muscle memory and make you flexible with the weapon. You want to work up to drawing from a concealed holster, pointing and dry firing (handgun unloaded) at different points, from different position, this is good training and will improve your shooting. 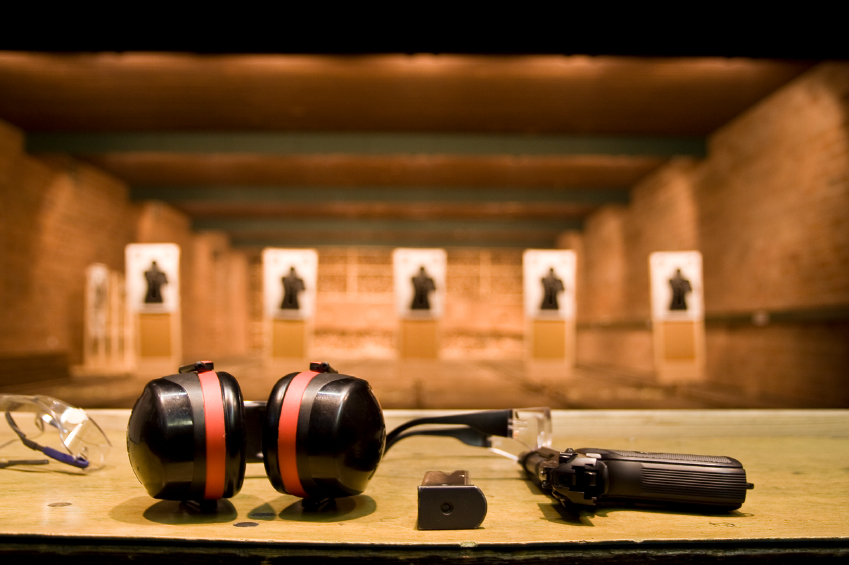 You want to practice instinctive shooting with an unloaded handgun before you go to the range.

You then want to progress to firing two quick shots; this is called “double-tapping”. At first, take this slowly; as you get more confident and accurate, speed up, make sure both of the shots hit the target. You want to work up to being able to fire at least five shots instinctively, rapidly and accurately into a target at 5 yards/meters and beyond. If you are involved in a hostile situation you need to put as many rounds as possible into the criminal as quickly as possible to end the confrontation before you, your family or clients get hurt. Remember, you need to have a good grip and keep your wrist locked and forearm aligned with your handgun. As you will see Instinctive, or point shooting, is simple: just get a good grip on the weapon then point and shoot. A lot of instructors over complicate things to try to make themselves look intelligent. This is OK for competition shooting but could ultimately cost you your life in a street situation- keep it simple.

As I have previously stated, if you are unfortunate enough to ever have to use your handgun for defensive reasons, you need to continue to put rounds into the criminal or terrorist until they go down and no longer present a threat. If you do not think you could ever shoot and possibly kill a person, then don’t carry a gun and consider other non-lethal methods of self-defense. If you pull a gun and freeze, you could be giving the bad guys a weapon they could take from and used against you.

When starting out use the center of the chest area of the target as your point of aim and, in time progress to head shots. As you will have read, the best place to shoot someone in order to immediately incapacitate them is in the head. The issue with head-shots lies in the fact that the head is a smaller area to aim at and hit than the chest. You stand a better chance of getting a bullet in your opposition by aiming for the center of the chest but one round to the head and the confrontation will be over. You must remember that in a real-life situation things will happen quickly, as you and your target will most probably be moving and chances are it will be dark and you will need to put bullets into your opposition quickly. Head-shots are best and you should train for them, with practice you should be able to put rounds into the head area of a silhouette target at 5 yards/meters with little effort. A lot will depend on your capabilities with your handgun, if you know you cannot get head-shots past 5 yards/meters go for the chest. If you are engaging moving targets at your medium distance go for the center of the chest and as always fire multiple rounds. 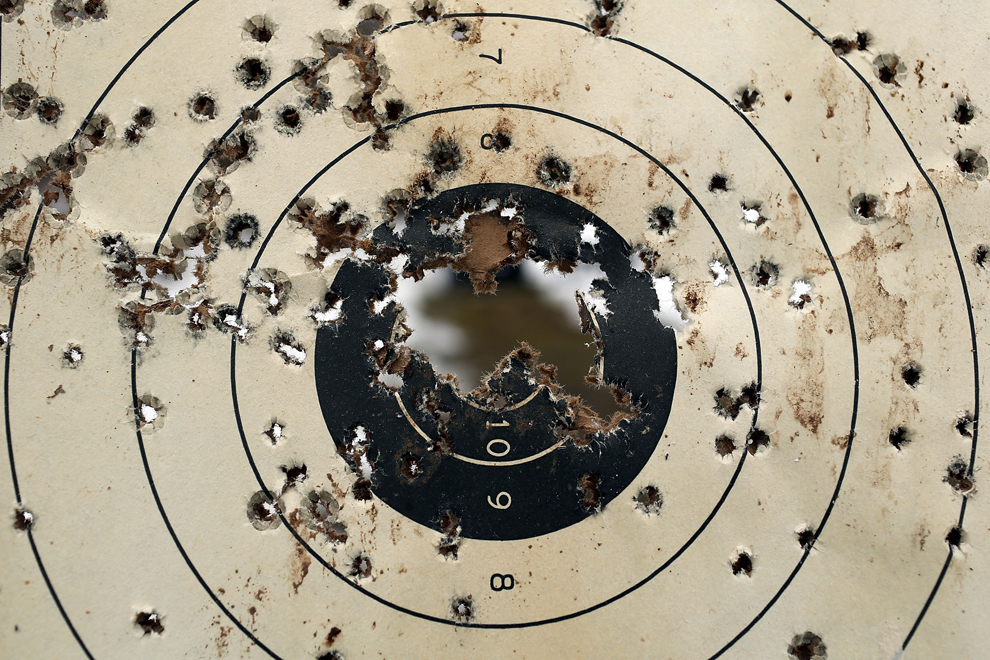 When starting out use the center of the chest area of the target as your point of aim and, in time progress to head shots.

Do not get into the habit of shooting the center of mass on police qualification silhouette targets as this is usually the middle of the stomach area, shots there will kill someone in time but there are no vital organs there that immediately incapacitate someone. A good example of this could be the Toulouse (France) terrorist incident in March, 2012 where the terrorist “Mohamed Merah” was killed by French Security force. The terrorist “Merah” was responsible the numerous attacks on unarmed French military personnel and Jewish families which resulted 8 deaths and others wounded. The French police and security forces located Merah at his 2nd floor apartment and a siege situation developed. After several days, the tactical team “RAID” assaulted Merah’s apartment, which he had barricaded to slow down attackers. When the RAID team made entry Merah attacked them with guns blazing, in the resulting gun battle 3 members of the RAID team were shot. Merah was shot over 20 times but still managed to jump through a window, where he was finally killed by a sniper with a head shot.

It was reported Merah received multiple shots to the arms and legs, it’s clear the RAID assault team were not going for head shots, the after incident reports state over 300 rounds were fired. Especially at close quarters you must be hitting vital organs and bones to end the situation as quickly as possible. The RAID team is very highly trained but at close quarters when lead is flying and there is no cover luck has a lot to do with not getting hit! So, avoid the situation or end it as quickly as possible!

After a while of practicing instinctive shooting, you should be consistently hitting the target in the chest and head areas, without using your sights and firing multiple rounds. You should then practice with the target at 7 yards and then at 10 yards as your shooting gets better. Novice shooters are usually surprised at how inaccurate a handgun can be. Numerous times we have had students who fire a 5-round aimed grouping at a target 25 yards and are baffled why they missed. Everyone misses to start with and you must remember that you cannot become an expert marksman after shooting 50 rounds- it takes time and practice.  It is only in the movies that someone can shoot from the hip with a handgun and hit a person running 100 yards/meters away. Handguns are meant in general for close quarters conversational range targets. 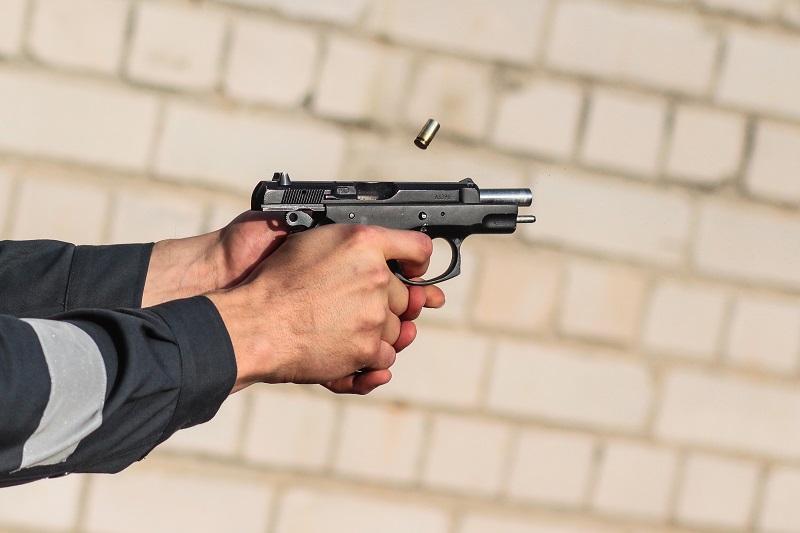 If you intend to carry a handgun, you must learn to draw the handgun from your holster. You should buy a quick draw holster, without thumb breaks or retention devices, but I will discuss this in a later chapter. To draw a handgun, you simply grip the handgun, pull it from the holster and point it at the target in one smooth movement. The handgun should take the shortest route from the holster to the target. Care must be taken when you initially start drawing from a holster and you should practice first with an unloaded handgun until you feel confident enough to draw with a loaded handgun.

When you can draw from a holster and instinctively shoot and hit your target make things a little more difficult by practicing drawing while wearing a shirt or jacket. Additionally, you need to practice firing with one and two hand grips both left and right-handed, firing from cover, firing from a seated position, firing from a kneeling position, etc. Again, these drills can and should be practiced dry firing, until you feel comfortable enough to do them with a loaded handgun.

If you are training properly after putting several hundred rounds down range, you should be able to smoothly draw your handgun from a concealed holster and put multiple rounds accurately into the vital areas of two targets at 7 yards/meters. You will then be ready to carry a handgun for defensive purposes and be better trained than many supposed professional’s firearms experts, criminals and terrorists.

About the author: Orlando Wilson is ex-British Army and has been in the international security industry for over 25 years. He has initiated, provided, and managed an extensive range of specialist security including investigation and tactical training services to international corporate, private, and government clients. Some services have been the first of their kind in the respective countries. His experience has included: providing close protection for Middle Eastern Royal families and varied corporate clients, specialist security and asset protection, diplomatic building and embassy security, kidnap and ransom services, corporate investigations, and intelligence, tactical, and paramilitary training for private individuals, specialist police units, and government agencies. You can learn more about Orlando and his services at his site Risks Incorporated.

Source
Shoot To Kill: Instinctive Shooting is written by Orlando Wilson for theprepperjournal.com