11 Dangerous Plants You Should Never Have In Your Backyard

We spend a lot of time planning our gardens to fill them with beneficial plants for when SHTF. But we don’t often think about what we don’t want in our garden.

Many common backyard plants are toxic, and ingestion can potentially lead to death, especially in a situation without medical care.

So here’s a list of 11 dangerous plants that you should never have in your backyard, especially if you have children or pets.

Lily of the Valley

Lily of the Valley is a popular flower in many spring gardens.

It grows natively in temperate forests around the world.

While popular in floral arrangements and bouquets, this flower can be poisonous if ingested.

Flowers, stems, and roots are all poisonous if ingested. They can cause stomach ache and nausea, blurry vision, and a slow, irregular heartbeat.

In more extreme cases, the symptoms can include diarrhea and vomiting, seizures, and heart arrhythmia that can lead to death.

If you suspect that someone has ingested Lily of the Valley, you should seek immediate medical attention.

The line between poison and medicine is often thin, and Lily of the Valley isn’t all bad. It can be used medicinally to treat seizures, heart disorders, and burns. During WWI, it was used to treat the effects of gas poisoning.

Related: 5 Poisonous Plants That Can Be Used As Medicine When SHTF 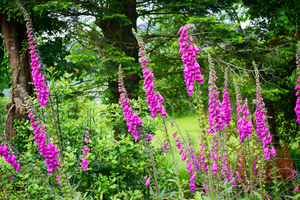 Foxglove is a common garden plant known for its pretty flowers.

But don’t let its innocent appearance fool you.

All parts of the plant are poisonous as it contains certain cardiac glycosides, chemicals that can affect heart rate.

As we mentioned with Lily of the Valley, poison, and medicine can be two sides of the same coin.

Foxglove can be a potent heart medicine when used properly. However, if the dosage is incorrect, it can be fatal. 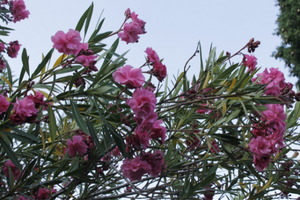 A common flowering shrub in Southern gardens, Oleander is not only beautiful but also highly toxic.

All parts of this plant contain compounds that are poisonous to both humans and animals.

And you don’t need to eat a lot either. Just a tiny amount can slow or irregular heartbeat, low blood pressure, visual disturbances, vomiting, and diarrhea.

Consuming large amounts can cause death or long-term health problems. 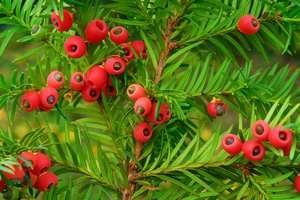 Yews are evergreen shrubs that are commonly found in gardens and used as hedges.

But this ornamental plant, while attractive is highly toxic.

All parts of the plant are poisonous, but it’s the berries that are most concerning.

The small red berries produced by yew are particularly attractive to children. This is concerning as the seeds contain the highest concentrations of toxic compounds.

Also concerning is that the toxicity levels are higher in winter when yew is commonly used as holiday decorations. Certain varieties, like English yew, are more toxic than other varieties. 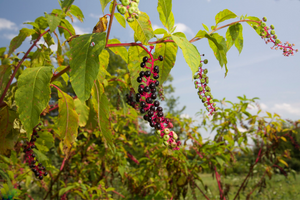 Pokeweed is a common wild plant that grows across much of the US.

While commonly found on forest edges, it can also be a garden weed.

The berries look similar to grapes, making them particularly attractive to children.

However, they are highly poisonous, though more so when they are unripe and green.

Young stems and leaves can be edible if cooked and prepared properly. 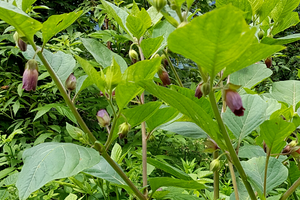 If you don’t know belladonna, you may know it by one of its other common names, deadly nightshade. Despite its toxicity, it has been used by people throughout history for its medicinal properties. Belladonna can grow to 7 feet tall and features oval leaves and purple bell-shaped flowers.

When it fruits, the berries begin green and ripen to a purplish-black, that makes them attractive to animals and children.

Related: How to Tell the Difference Between the Poisonous Virginia Creeper and the Healthy American Ginseng

While the berries are the most come source of accidental belladonna poisoning in children, all parts of the plant are poisonous and hallucinatory. 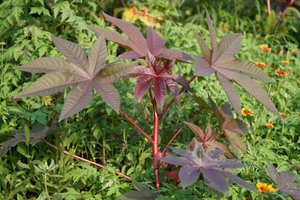 Castor bean plants grow as a weed in the southern area but are often planted as an ornamental in more northern climates.

The plants feature large star shaped leaves and prickly seed pods making it an attractive and distinct addition to your garden.

However, the seeds contains the deadly poison ricin. Eating as few as four seeds can kill an adult and even fewer will kill a child. However the seeds can be pressed into a non-toxic oil that can be used medicinally. 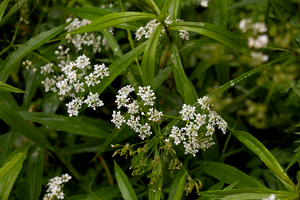 According to the USDA, Water Hemlock is the most poisonous plant growing in America. It contains a toxin called cicutoxin, which causes violent convulsions and death.

If you mistake water hemlock for a non-toxic plant, like celery or wild parsnip, it can kill you in as little as 15 minutes.

Not only is water hemlock dangerous to humans, but it is also poisonous to livestock as well.

A wetland plant, it is commonly found along streams and wet meadows in the Western US. It can reach 2 – 3 feet tall, has small white flowers and notched leaves. 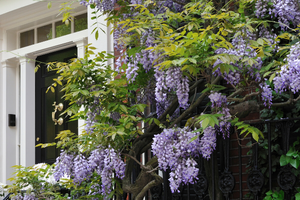 A common ornamental vine, known for its beautiful purple flowers, wisteria is another plant that is highly toxic if ingested.

While all parts of the plant are poisonous, the most common part to be ingested are the seeds which can be confused for beans.

While wisteria is unlikely to kill you, eating it will make you ill for several days. Symptoms include headache, upset stomach, dizziness, and confusion. They can linger for up to a week. 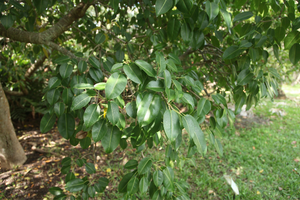 The Manchineel tree is only found in Florida, but it’s still worth mentioning because it is extremely dangerous.

The tree contains a toxic sap that can cause extreme contact dermatitis.

Just standing beneath the tree during a rain storm can lead to blistering.

This deadly tree has a deceptively innocent looking fruit that will taste sweet until the poisonous sap begins to burn your esophagus and stomach.

Related: The Most Dangerous Tree In The U.S.

In places where the trees are common, they are often marked to advise people of the danger.

Both rhododendrons and azaleas are common backyard shrubs planted for their beautiful flowers. 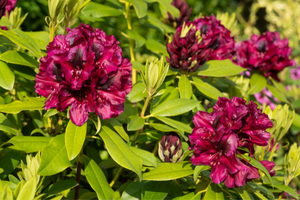 But if you eat large amounts of any part of either plant or even honey made from their flowers, it can cause life-threatening symptoms.

The most common problem associated with these shrubs comes from children trying to suck the nectar from the flowers like they were honeysuckles.

While the symptoms are generally mild, they include mouth irritation, nausea, and vomiting.

More concerning is eating actually honey made by bees with pollen gathered from these flowers. It has been called “mad honey” because of the confusion it can cause. More concerning symptoms are low heart rate and blood pressure, which can cause death.

Interestingly enough, rhododendron honey was used as a bioweapon way back in the first century BC. Roman troops were poisoned by the Turkish by feeding them, contaminated honey. Their subsequent confusion and vomiting contributed to their defeat in battle.

Beekeepers especially shouldn’t keep azaleas or rhododendrons in their gardens. 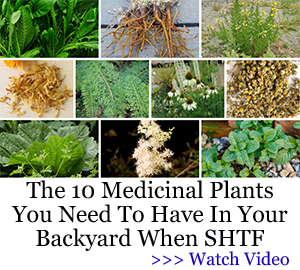 The Tree That Can Actually Get You Killed (Video)

Are You Prepared for the Biggest Social Unrest of Our Modern Times?

Source
11 Dangerous Plants You Should Never Have In Your Backyard is written by Rachael Blasbalg for www.askaprepper.com

How The War In Europe Will Affect The US Economy